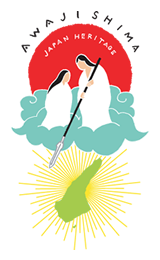 What is Japan Heritage?

Japan Heritage is a Program in which the Agency for Cultural Affairs recognizes stories that convey the culture and history of Japan through regional historical points of interest and characteristics. It was founded in 2015 and involves plans to recognize 100 places throughout Japan by the 2020 Tokyo Olympic and Paralympic Games. The Agency aims to revitalize local communities by conveying these attractive tangible and intangible cultural properties as stories.

What is Awaji Island Japan Heritage?

The opening chapter of the Kojiki (the oldest historical record of Japan), ‘The island of Kuniumi, Awaji: The ama who supported the ancient state’

The opening chapter of the Kojiki (the oldest historical record of Japan), ‘The island of Kuniumi, Awaji: The ama who supported the ancient state’ submitted by the cities of Sumoto, Minamiawaji, and Awaji was recognized as Japan Heritage in April 2016.
At the beginning of Kojiki that is the oldest historical record of Japan currently in existence, it says that the special island first created in the magnificent myth of the beginning of the world was Awaji Island. This brought metal-working culture that marked the dawn of a new era, followed by ‘Ama’ who supported the kingdom in the Kinai region, territories around Kyoto and Nara, and daily life in the capital with salt-making techniques and highly advanced navigational skills.

Umi-no-tami: The island-based people who made their living on the sea
Ama: Umi-no-tami people given the name “Ama” and promoted to important posts by the Yamato Royal Authority


Ponder the Kuniumi story（Japan’s Creation Myth） and follow the footprints left behind by the Ama who helped form the ancient state. Even today, Awaji Island shows deep remnants of the dramatic story woven by its long history in the various cultural properties sprinkled throughout the island.

Welcome to the island of Kuniumi, Awaji. The island offers a beautiful natural landscape that has remained unchanged since long ago and presents lifestyles and culture of the island people who have continued to cherish it. Look, feel, walk through, and fully experience an island journey full of wonder.